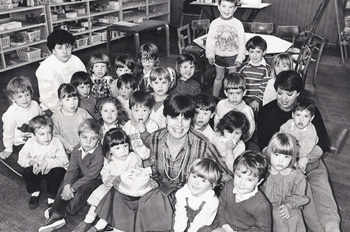 In 1988, responding to parental request, the Primary School was opened in an adjoining building. Due to the increasing demand for places at the school, a search for a larger property began.

In early 1991, her search ended with the purchase of the Old Rectory at Stow Bardolph, close to Downham Market. The school became Downham Preparatory School and Montessori Nursery.

The significant increase in pupil numbers resulted in the need for larger premises. In January 2005 a new purpose-built school situated in the grounds of the Old Rectory was opened. It offers up to date I.T. facilities, a large school hall and gym, library and classrooms equipped for specific subjects i.e. Art, Science, Geography, History, Modern Languages, English and Mathematics.

In October 2012 a new Outdoor classroom was erected in the school grounds giving the children excellent facilities and opportunities for outdoor learning and Forest school activities.

In 2018 the school applied to the Department for Education to alter its registration and gain  permission to extend the upper age limit from 11 years (Year 6) to 13 years (Year 8). The inspection took place during the Christmas term in 2018 and permission was granted. In September 2018 Elizabeth Truss MP opened a new purpose-built Science block to provide the facilities needed to deliver the Key Stage 3 curriculum. The computer suite was also refurbished with a new up to date computer system.

In September 2012 the Nursery moved into refurbished accommodation on the ground floor of the Rectory and the Baby Room was opened for children from 3 months of age, from here  there is free access to the outdoor area. The outdoor area, which is fenced off, has an all-weather, astro-turf play surface. This is equipped with resources for all areas of the EYFS and allows free flow to the outside all year round. The older nursery children also have  their own garden in the grounds of the Primary School, where they have a large variety of resources including, climbing equipment, tricycles, and a vegetable patch, as well as the school pond and wildlife/conservation area.

Our methods of teaching and the Early Years curriculum are the same at both schools. We have staff in both nurseries with a wide experience of working with children. They have a variety of qualifications including Montessori diplomas.