Kayley aiming to help others 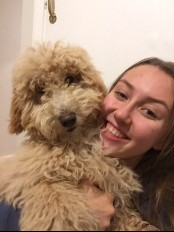 I joined Downham Preparatory School at the start of Year 4. Before going there, I had always struggled academically. However I had an enthusiasm to learn, which Mrs Sharpe saw in me. I was diagnosed with ADHD and semantic pragmatic disorder, which meant sitting still was not an option. However, with the types of teaching methods used at Downham, it meant I did not only have to sit still and learn, I could learn in a different way by making subjects come to life. I will never forget our trip to Duxford when we were learning about WW2 and had to pretend to be children in the war. I found understanding language hard, but the teachers were so amazing and would explain everything so I could understand.
After leaving Downham Prep I went to Wymondham College, where I boarded for five years. I achieved an A star in my biology and a B in physics course work, as well as C's and B's across the board. Once I had achieved my GCSE's I did a course in animal care and got a distinction. I found a passion for biology that I never knew existed before. I am now studying triple biomedical science Btec and have 5 offers from universities to study learning disability nursing. I am predicted a triple distinction star for my course which is equivalent to three A's.
I have always had to face barriers in learning, so now it's my time to help others overcome theirs.
Alongside with my sciences I have been playing water polo and hope to get scouted by GB at the BUCS league at university.

I will never be able to thank Downham Preparatory School enough for giving me a chance to flourish. I would love to come and visit - it’s always felt like a second home!